The German Schleswig is a sturdy, handsome, medium-sized draught horse that comes from the Jutland Peninsula. Mainly bred in Schleswig-Holstein, the Schleswig has always been a valued farm horse. Today, it is more cob-like than its ancestors and is still a valued all-rounder for forestry and general agricultural work, these being the main reasons people buy a Schleswig. A few breweries still make use of the Schleswig, knowing that these strong, gentle horses are hard-working and very appealing. It is a seriously endangered breed, though it is possible to find a breeder who will sell a Schleswig by contacting the breed organisation, the Verband der Schleswiger Pferdezüchter. 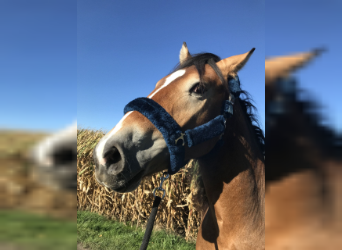 Schleswig Mix, Gelding, 3 years, 14.2 hh Leisure - Working Equitation - Driving
DE-44532
Lünen
€5,000
~ $5,368 Negotiable

Add to wish list
Stop looking and be found instead
With your personal request in search of the horse of your dreams.

Use and characteristics of the Schleswig

In Germany and Denmark, the breed is known as the Schleswig Coldblood (Schleswiger Kaltblut/Slesvigsk Koldblod) and breeders may sell a Schleswig under these names. Every aspect of its conformation conveys power, from the short neck with a full crest, to the strong and muscular hindquarters. Standing between 15.1 hands (61 inches/154 cm) and 16.0 hands (64 inches/162 cm) high, the breed has the low centre of gravity and strong shoulders that give it the power purchasers want when they buy a Schleswig. Their chests are strong and muscular, and they have a good depth of girth. The legs may carry some feather, though not excessively so.

Origin and history of breeding Schleswigs

The history of the Schleswig is closely related to that of the Jutland horse, as Schleswig was previously the Duchy of Schleswig, and part of Denmark. The breed’s history begins officially in 1860, with the imported Suffolk Punch stallion Oppenheim LXII. Whether Oppenheim was pure bred or part bred is uncertain, but as the foundation stallion for both the Jutland and the Schleswig, his influence and stamp is unmistakable. Interestingly, experts have argued that the Suffolk Punch breed itself descended from the horses of Norse settlers in Britain, and so it could be argued that Oppenheim was returning to the home of his ancestors. Other influences on the Schleswig, some without lasting effect, included the Yorkshire Coach Horse and Thoroughbred. Systematic breeding of Schleswig horses began in 1891 with the creation of the breed organisation, the Verband der Schleswiger Pferdezuchtvereine. The organisation’s original brand, the letters V.S.P. in an oval, are branded on the off hindleg of all registered Schleswigs. Since 1991, the society for the protection of the breed has been the Verein Schleswiger Pferdezüchter. From his birth in 1893 onwards, the line of the stallion Aldrup Munkedal 839 predominated, appearing in the ancestry of all Schleswigs today. 70,000 crowns were once offered for this valuable animal. As with many breeds, the twentieth century had periods of decline and resurgence. After WWII, French breeds such as the Boulonnais and Breton became influential in the development of the Schleswig. Numbers were at their height in 1949, with up to 25,000 brood-mares and 15,000 breeders in Schleswig-Holstein, but by the 1970s, the numbers were down to just 60 mares. Though numbers remain low and the breed is in the seriously endangered category, the handsome, powerful Schleswig has survived through the dedication of its breeders and with government support.

Schleswigs remain a popular choice for family farms and smallholdings today. They are sensible and friendly animals that will work hard at a variety of tasks. They are also useful for forestry work and are still used by the military, their ancestors having been artillery horses. Having worked as bus and tram horses in the nineteenth century, they are a good city breed too.