The Karachai is a breed of horse from Karachai-Cherkessia in the North Caucasus. This region, formerly part of the Soviet Union, has produced several clearly defined horse and pony breeds due to the nature of the landscape, with its lofty mountains and deep valleys. This encouraged the development of distinctive local types, including fine riding horses like the Karachai. Today most purchasers buy a Karachai for trail riding and it also plays an important part in the heritage of the region as well as equestrian tourism. Most of the breeders and stud farms which sell a Karachai are also in the original homeland of the breed, where it is very popular. 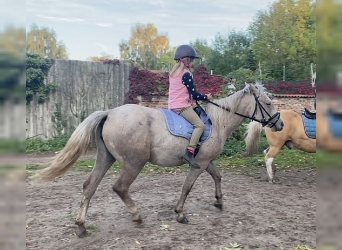 Use and characteristics of the Karachai

Karachai horses, also known as Karachay horses, average 14.3 hands (59 inches/150 cm) to 15 hands (60 inches/152 cm) in height. Three types of Karachai are recognised in the stud book. The basic Karachai is a good all-round riding and harness horse, and this is the type that is most readily available for equestrians wishing to buy a Karachai. The second type is taller and shows signs of Thoroughbred influence. Breeders sell a Karachai of this type as a sports horse. The third type is sometimes described as massive, or “blocky”; having a strong, square body, they are principally used for draught horse work. A Roman, or ram-shaped head is typical of all Karachai horses. They are healthy, strong animals, with excellent feet but their hind legs sometimes have conformation issues such as sickle hocks. Full, wavy manes and tails are very characteristic of this breed.

Little is known of the origins of the horse breeds of the Caucasus but they clearly descend from very ancient stock. Although access through this mountainous landscape was difficult in ancient times, there is evidence to suggest it was an important trade route between the steppe, a source of domesticated horses, and regions such as Mesopotamia. As different types of horse began to develop in ancient times, these were probably traded through the region as well as used to develop local breeds. It’s thought that the original Karachai stock were pony-sized animals, and that some selective breeding may have begun a thousand years ago. Like many Eurasian breeds, it’s possible that the Karachai horses were once kept as semi-feral animals by the Karachai people who bred them. However, like most of the nearby Caucasian breeds, since the start of their recorded history, they have been kept in taboons. This is a type of horse husbandry in which herds of horses graze the mountain grass under the watchful eye of a herdsman. Like the neighbouring Kabardin, or Kabarda horses, Karachai horses were formerly used by the cavalry. For many years while the region was part of the Soviet Union, the Kabardin and the Karachai were classified as a single breed. However, in recent years the Karachai has once again been defined as a breed in its own right and is bred today in substantial numbers.