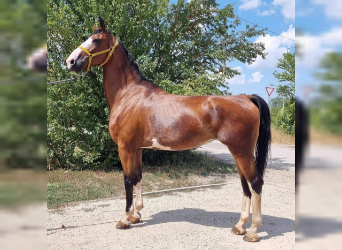 Now that coach or carriage driving is no longer an everyday sight, there are fewer opportunities for the public to see draught and harness horses at work. However, that’s not the only reason that a team of high-stepping Gelderland horses drawing a vehicle always makes people stop and stare. These tall horses with the proud head carriage are exceptionally impressive light draught warmbloods, and that is one of the main reasons people buy a Gelderland. Their contribution to other equestrian activities, particularly show jumping, is less well known. All the same, experienced breeders and trainers who sell a Gelderland fully appreciate the extent of their athletic capabilities. They are very agreeable horses, too!

The breed originated in the Dutch province of Gelderland, an agricultural region in the centre of the Netherlands. The original Gelderland, or Gelderlander, was bred to be a good all-round farm horse that also had an impressive presence when in harness. The foundation mares were local and from early times onward, stallions of the outstanding European breeds of the period such as Andalusians, Neapolitans and Anglo-Normans were used. In the nineteenth century, Thoroughbred, Norfolk Roadster, East Friesian, Oldenburg and Hackney horses were added to the mix, along with Holsteins and, later, Selle Français. The Dutch breeders had an open and practical approach to breeding and this brought great results. The outcome was a very distinctive horse, with a ground-covering, elevated trot, high head-carriage and outstanding presence. In profile, their long heads are straight or convex, often giving them a noble, Roman-nosed look. Breeders selected for horses with white facial markings and white legs, as these add to the overall impression of flashing, lively movement as the Gelderlands trot down the road. They have excellent feet and are usually very healthy, long-lived horses. Another notable feature of the breed is the high withers at the end of their beautifully arched necks. The success of the modern Gelderland is also a testament to the ability of its breeders to adapt, particularly when increasing mechanisation threatened the horses with extinction in the post-WWII period. This was when the first Dutch warmblood sports horses began to make a name in international competition, and a new studbook, the Warmbloed Paarden-stamboek in Nederland, was set up. This gained royal recognition from Queen Beatrix in 1988 and now the general term KWPN is applied to all Dutch warmbloods, including Gelderlands.

In addition to competitive and pleasure driving, long-striding Gelderlands are successful show jumpers. The Dutch Jumping Champion Gondelier cleared 7'3" (2.20 meters) in 1972. They are also a force in dressage, competing at Grand Prix level. Their individual registry has now been restored within the KWPN studbook, where they are rightly known as the Gelderlander Versatility Horse.

Use and characteristics of the Gelderland horses

The Gelderland has contributed immensely to the modern Dutch warmblood and is one of the key components of the studbook. They are usually between 15.2 hands (62 inches/157 cm) and 16 hands (64 inches/163 cm) high, although in recent years there has been a tendency to use larger Gelderlands for competing and in commercial coach and carriage driving. This means it’s now easier to buy a Gelderland of 17 hands high (68 inches/173 cm) or more. Many are chestnut coloured, though black and grey are also popular. In the harness world, coloured horses (also known as tobiano, or piebald and skewbald) are extremely stylish, and there’s always plenty of interest when participants sell a Gelderland with one of these eye-catching coat patterns.

Interior of the Gelderland horses

Gelderland horses are a breed renowned for their strength, intelligence, and endurance. Not only do they have immense power and agility in the saddle, but they are also known for having loyal and gentle temperaments. This makes them enjoyable to live with and an ideal choice for those looking to ride or show. The average Gelderland stands between 15 -17 hands tall, featuring long legs and a muscular build that is both powerful yet elegant. Their chests are deep, with short backs and well-sprung ribs culminating in broad hindquarters that give them plenty of drive when moving forward. Gelderlands tend to be very easy going when it comes to handling which is a testament to the care taken when selecting bloodlines. They learn quickly and possess an immense amount of energy - making them suitable mounts for both experienced riders as much as novice ones! All in all, Gelderland horses have much to offer any riding program - combining good looks with solid temperaments. Whether you’re a competitive rider looking for a trusty mount or simply someone who wants an enjoyable companion at home, these steeds will never disappoint!

Exterior of the Gelderland horses

Gelderland horses are a powerful and elegant breed, easily distinguishable by their distinctive exterior. Not only do they have impressive strength and stamina, but their well-proportioned physiques make them stunning equines to look at as well! Standing between 15-17 hands tall with long legs and sturdy frames, Gelderlands boast deep chests and short backs. Their front end is balanced by strong hindquarters that give them plenty of power when walking or trotting. When it comes to coat colors, most Gelderlands have brown bodies with black manes and tails, although some chestnut shades can be found - especially in the ears! Many also feature white markings on their necks as well as four socks ranging from the back legs to the knees. In addition to their good looks, these horses possess permanently pricked ears that face forward - a trait which often signifies intelligence and responsiveness. This is paired with alert dispositions that allow them to stay focused in any situation. All in all, the exterior of a Gelderland horse is truly remarkable - combining size and refinement into one beautiful package that's hard to resist! Whether you're looking for a showhorse partner or an intelligent family companion, this noble steed won't let you down.

History of the Gelderland horses

Gelderland horses have a proud and noble heritage that dates back to the early 16th century. Originally bred in the Netherlands, these strong and reliable steeds have been favored by many over the years for their intelligence, stamina, and grace. During the late 16th century, Gelderlands were used extensively as war horses due to their level-headed temperament and athleticism. However, it wasn't until later in their history that they became popular show or pleasure horses - thanks to their good looks and steady dispositions. By the 19th century, breeding methods had come a long way which resulted in reliable animals with consistent temperaments and abilities. This gave rise to more advanced dressage techniques often showcased in prestigious European shows such as those hosted in The Hague. Today, Gelderland horses are widely revered for their all-around capabilities which makes them suitable mounts for even novice riders. They can be found competing all around the world - from dressage competitions to cross country events - proving that they still possess those same traits which made them so desirable centuries ago! No matter what you’re looking for in an equine companion, there’s no denying that Gelderland horses have much to offer - combining strength with grace that few other breeds can replicate!